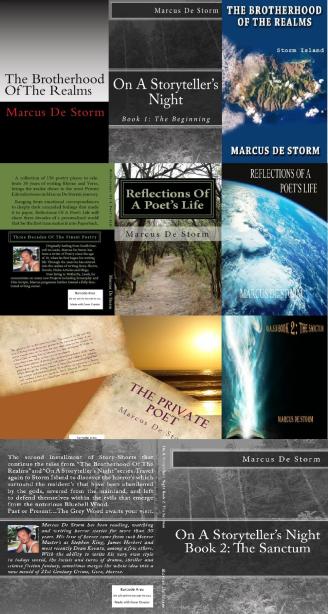 REFLECTIONS OF A POETS LIFE (e-BOOK/KINDLE)

Reflection Of A Poet’s life is the bringing together of 30 years’ worth of various poetry pieces from the pen of Marcus De Storm, an Author dedicated to the style of Rhyme & Verse.

In this first ever edition of published poetry, the author describes through his thought to paper – to post – segments of life; Birth, Growing-Up, Parental Love, Friendships, Loves gained & Loves lost, Laughter, Tears, Heartache and the effects in which most of us feel with death.

Sometimes regarded as “Deep”, “Emotionally Fused”, and at the best of times “Darkened”, it may be that “Reflection Of A Poet’s Life” reads with some form or handle of understanding by the reader themselves, while some may find some degree of association or connection with a feeling, reaction or response.

From the popular “The Dreamer’s”, “Edgar’s Subway”, “Dream Within A Dream” and “Eclipse”, it has been the goal of the Author to take his works to the world, and without a doubt, with the release of this Poetry Novel, he is doing just that.

A mixed selection of personal poetry spanning more than thirty years. Capturing the many different instances of personal and sometimes private experiences, Reflections Of A Poet’s Life will bring both meaning and that of understanding to many of its readers. Penned by the Writer/Author of “The Brotherhood Of The Realms” and “On A Storyteller’s Night” series, the vast amount of poems found within this collection collide with both attraction and detraction within a cold, dark and uncertain world. Reflections Of A Poet’s Life is also available on eBook. More of Marcus De Storm’s releases and future releases can be found on the Author’s personal website at http://www.themkdsnetwork.com, where you will find the latest news, exclusives and a list of Writing Projects coming up in 2012/2016.

ON A STORYTELLERS NIGHT Vol.1 (PAPERBACK)

The Isle of Storm has had many tales to tell over the past ten thousand years; tales of Gods walking its soil, tainting its earth, battling the human mages of old, and watching, guiding, taunting the humans that remain there. From the pilot novel, “The Brotherhood Of The Realms”, the history of Storm Island is revealed piece by piece, from present to past, and vice-versa, the route is never the same – though the ending in most cases is of spilt blood and baring the ultimate sacrifice that only a mortal human being can offer. Whether your taste is in the crime or the horror, the outcome will be both the same, as you take to your journey down a road less travelled. Choose from the shorts of The Man In Black, The Haunting Of The Dog, Awakening, or that of The Bluebell Mystery. Each has its very own story to tell, each as individual as the next, but all with one true fact in common – The Isle of Storm. Death is not necessarily the end.

Lady Melissa James-Cartwright is in her mid-40′s, her attractive looks just as sharp as the mind which was given the very best education, the very best lifestyle and the best place within political circles.

When she receives word that her brother-in-law, Terrence O’Neill has died of a heart attack, she attends the funeral at her sister’s old home – a home where she was shunned from several years before. Lady Melissa James-Cartwright, the last of the Cartwright family line of daughters, travels to Cacciatori Wake Manor for one reason only – to get her Nephew Xander O’Neill and take him back to London.

With an ex-SAS Sergeant for a PA, Melissa attends the funeral alone and later meets up with David Price, her PA, where they play a dangerous game of Cat and Mouse with the local G-Cell who is led by Xanders’ guardian Father Richards, who is well known for his tainted religious order – The Church of the New Faith. Hiding behind this non-ending loop of mass destructive bullshit, Melissa and David need to find out whether there was any truth in the stories surrounding the controversial Order.

Finding help in Stacey, Xander’s Personal Aid, a meeting is arranged and events are set in motion where around every corner there is danger, intrigue, sex, violence and the use of political power. Exactly what Melissa and David have walked into, as they discover, is the struggle of an age old war of Secret Orders, and the initiation of electing a new leader for a new millennium – Xander O’Neill.

As the first chapter introduces the main cast that in the traditions of Cacciatori Wake Manor set out before the reader, it is the further introduction of less expected characters; Stacey, the loyal Aid to Xander, Giles, the puppet of Father Richards, and Lord Beacham, the illusive visitor who is not all that he seems when it comes to Lady Cartwright and David Price. A corner stone foundation that build the rest of the story into a legendary epicentre of intrigue, lust, jealousy and murder.

The fight for Xanders’ custody will be harsh and intense, but most of all for the winner of the son and heir, the cost may be greater than anyone ever imagined. A twisted echo, a past voice and a ghost of the once living High Hat of Cacciatori Wake Manor will have every proceeding chapter rock the very foundations of the Establishment.

Gateway To The World